You are here: Home / What is the Fastest Dot Matrix Printer?

Based on the following tests:

The two fastest dot matrix printers are the Compuprint 9300 and the Epson DFX 9000. Here are the details…

The DFX 9000 has the quickest burst speed of any dot matrix printer on the market. But when running tests for a reliable printer that prints the bulk of multi-part forms, labels and other common print jobs the Compuprint 9300 smoked the Epson (see the results of the 5 speed tests listed above).

Different print jobs perform better on different machines. If you have large print applications, it’s wise to test how well different printers handle your specific application. That’s the only way to truly find the fastest dot matrix printer for you.

It’s a pain in the neck installing a new, top-of-the-line machine only to find out the printer fumbles your most important print jobs. Having professionals run tests for you on different machines ensures that you’ve made the best choice for your situation.

Call one of our printer technology experts at 1-866-430-6202 and schedule your free print test. Or complete the online form here › 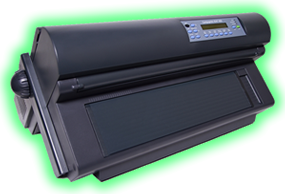 Have a question? Ask a dot matrix expert: